Today, let’s talk about the cmake test. However, we are still talking about C + + testing. Cmake provides us with perfect testing support, for example, it has a special module ctest. Cmake native test support The cmake native support test is very simple, with only two functions: enabletesting addtest(NAME COMMAND. CONFIGURATIONS. CMake and CTest with Google C Testing Framework. CMake makes it very easy to add other projects that use CMake to the build as a dependency. Google’s C Testing Framework provides a CMakeLists.txt, so all you need to do in order to add gtest to your project is point your CMakeLists.txt to the gtest folder. Mine’s in the ‘lib’ folder. Many of these examples include standard CMake modules. Building a C/C unit test (gtest) We use Google Test (gtest) for unit testing of C/C code. Example # the usual boilerplate setup cmakeminimumrequired(2.8) project(mytestproject LANGUAGES CXX) # tell CMake to use CTest extension enabletesting # create an executable, which instantiates a runner from # GoogleTest, Boost.Test, QtTest or whatever framework you use addexecutable(mytest testmain.cpp) # depending on the framework, you need to link to it targetlinklibraries(mytest gtest. C project setup with CMake & unit tests (google test) - Raymii.org. Table of Contents Install cmake & googletest Folder structure CMakeLists.txt Main folder CMakeLists.txt src folder CMakeLists.txt: tst folder CMakeLists.txt: Add some (example) source code and tests Source Code Test code Compile all the things Run all the things This guide will show you how to setup.

❗ This post is over one year old. It may no longer be up to date. Opinions may have changed. 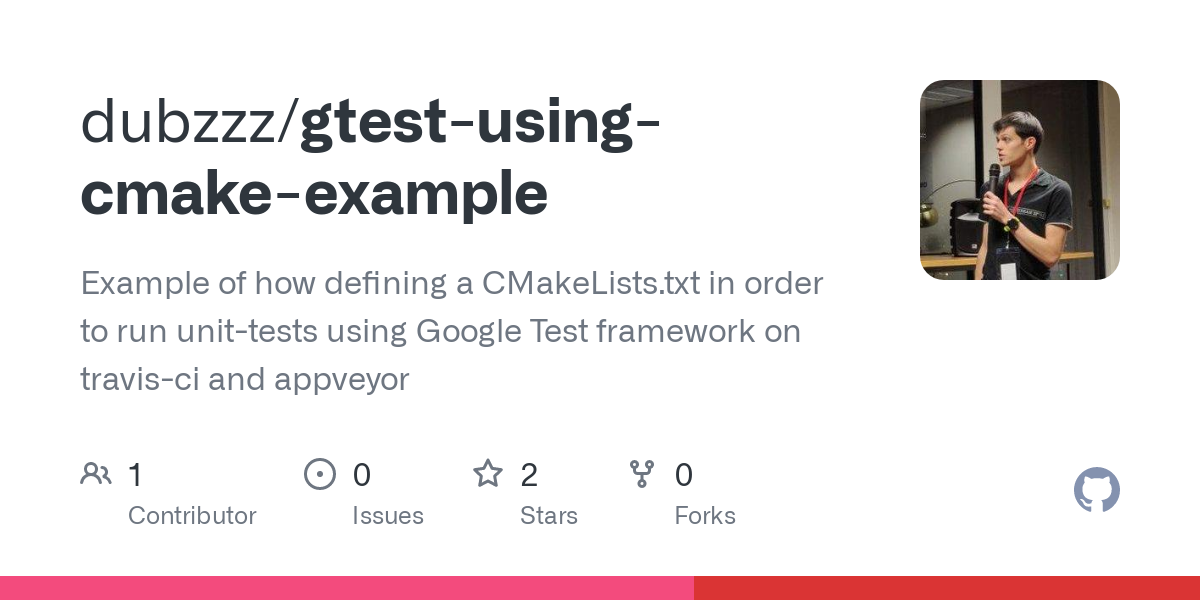 This guide will show you how to setup a new C++ project with CMake and unit testsvia Google's test framework. With this setup you can get started right away with test-driven-development in C++. It is also simple enough to look and figureout how to add gtest to your existing project and start doing TDD on your legacy (existing) codebase.

Consider sponsoring me on Github. It means the world to me if you show your appreciation and you'll help pay the server costs.
You can also sponsor me by getting a Digital Ocean VPS. With this referral link you'll get $100 credit for 60 days.

The picture below shows the end result, a running unit test:

There are a million different ways to 'do' C++ projects, but using CMake andthe google testing framework has my preference. That's not to say that using a Makefile or Boost Unit Test is bad, use whatever suits your needs. This guide however will focus on just CMake and gtest.

It assumes a system running Ubuntu (18.04). It also works on Windows with mingw,but I haven't tested in with MSVC.

My preferred code editor is CLion from Jetbrains, which has most of this built in. This guide however focusses on the manual / command line way since CLion isnonfree (and paid) software.

The process is not that complicated:

I assume you already have your compiler installed and working. Installing cmakecan be done with the package manager on Ubuntu:

On Windows, you can use MinGW or cygwin to install your development tools including CMake. Clion offers a nice GUI for that.

Googletest is available as a git repository which you can clone and then copyinto your project. You could go all fancy with CMake scripts to download itif it's not already in your project, but since you can clone once and copy later on I choose not to automate it. Clone the repository:

gtest comes with a CMakeLists.txt so integrating it in your project is easy.

Create your C++ project folder. I like to keep the following structure for simpleprojects:

Here is a oneliner to create the folders:

Copy the googletest repository folder your cloned earlier into the lib/ folder.

If you have multiple components you can create extra sub folders, but that doesrequire tweaking the CMakeLists.txt files to work with multiple libraries.

Most of my personal projects are simple enough to fit into one folder as above.

In the tst folder the unit tests reside. I try to keep the tests limited to the same function in seperate files. In the above example I have Formula.h and Formula.cpp, which house the example Formula class. All unit tests relatedto this class thus should reside in Formula-test.cpp.

The file CMakeLists.txt contains a set of directives and instructionsdescribing the project's source files and targets (executable, library, orboth). This can get quite complex quite fast, CMake has many options. I try tokeep it simple in this guide.

I'm using a non-recommended way to include files. For simple projects with a few files you should use the following:

That is a recursive search to include all *.cpp and *.h in the folder. Inmy IDE I have auto-reload enabled, that way I can't forget to add a fileto CMakeLists.txt every time. For proper administration you should not use thissince it just includes everything, could have unwanted side-effects.

Each subdirectory in our case also needs a CMakeLists.txt file.

The name of the project is ExampleProject, that variable is used in other files.The rest of the file just includes the different subfolders. If you omit the include_directories(src), your tests will not be able to find the header files.

The name of the compiled program will be ExampleProject_run, which is whatwe defined in add_executable. The add_library is used to include the codein the unit tests.

This list used the src defined library and adds the tests as a target. The compiled executable file is named ExampleProject_tst.

At this point you start developing. But since this is a example setup, I'll adda simple class file to show you how to do the unit tests.

Copy the below code into your project:

This function returns the given int multiplied by 2.

The following code is to setup the unit tests.

This file will run all the tests and since we recursively included everythingwith CMake, it will effectively run all tests in all files in this folder.

The Google Test Primer is a great starting point to learn more on the specificsof the testing framework.

Compile all the things

Now that we have sourcecode and testcode in place we can compile everything (both the binary and the tests).

Do note that you should do this in the build folder. If you do it in the main folder it will work, but it will litter up the directory.

There are now a bunch of files and folders in the build folder, most important,the Makefile. You can now compile the project:

You now have two executable files, as defined in the CMakeLists.txt:

Run all the things

If all went well, the code should run:

The tests as well:

A quick one-liner to compile and run the tests. You can run this wheneveryou want to re-run the tests (after changing code for example):

As you can see I changed a unit test so that it failed.

Google Test and Google Mock are a pair of unit testing tools developed by Google.

Learn about the framework specifics in the Google Test section of our Unit Testing Tutorial.

Adding Google Test to your project

Take a look at this example in Unit Testing Tutorial.

In the files with gtest included, you can generate code for tests and test fixtures using the Generate menu Alt+Insert.

When called from a fixture, this menu additionally includes SetUp Method and TearDown Method:

CLion automatically creates a Google Test configuration for every CMake target linked with gtest or gmock.

Instead of editing a single configuration, you can modify the Google Test template itself. In this case, the settings you specify will apply as defaults to all new configurations of this type.

In CLion, there are several ways to start a run/debug session for tests, one of which is using special gutter icons. These icons help quickly run or debug a single test or a whole suite/fixture:

When you run tests, the results (and the process) are shown in the test runner window. This window includes:

Test tree shows all the tests while they are being executed one by one. For parameterized tests, you will see the parameters in the tree as well. Also, the tree includes disabled tests (those with the DISABLED prefix in their names) and marks them as skipped with the corresponding icon.

You can configure some tests to be skipped based on a condition evaluated at runtime. For this, use the GTEST_SKIP() macro.

Google Test supports this feature starting from the version 1.10.0, so make sure to update the framework's sources in your project.

Add the conditional statement and the GTEST_SKIP() macro to the test you want to skip:

Use the Show ignored icon to view/hide skipped tests in the Test Runner tree: